Posted at 18:37h in Byron News, Lifestyle by Ed Silk

It’s a healthy life here in Byron Shire. Just about every week there’s a sports competition, charity run, paddle or triathlon going on. This weekend, being Australia Day, we’ll have the Australia Day Paddle from Wategos Beach to Main Beach, raising funds for charity. 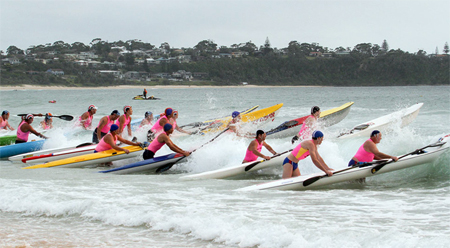 But what about those heroes of our beaches, the Surf Lifesavers? The Byron Bay Surf Club has done the Shire proud once again, winning the annual New South Wales Country Surf Life Saving Championships for the third year in a row. This was no mean feat with more than 1,200 competitors from every non-metropolitan surf life saving club in New South Wales. The event was held in Shoalhaven at the Mollymook SLSC from the 17-19 January.

According to Byron Bay’s Head Coach, Paul Irwin, “Byron’s strengths have always been our teams which are what has helped us again this weekend. Our team members are always keen to back up and our Masters are not just interested in competing but rather developing and supporting the younger athletes is seen as being just as important.”

So head to the beach this weekend and get into the swim or play some beach cricket over the Australia Day long weekend. Sports are a huge part of our heritage after all.