As the muddy gumboots of satisfied Splendour in the Grass attendees depart Byron Bay, the Shire welcomes the next wave of festival goers. The Byron Bay Writers Festival, although a somewhat quieter event, promises to satisfy, edify and inspire.

The 2013 Byron Bay Writers’ Festival runs from this Friday the 2nd through Sunday the 4th of August at the North Byron Events venue, located at the beach end of Bayshore Drive in the Byron Arts and Industrial Estate. 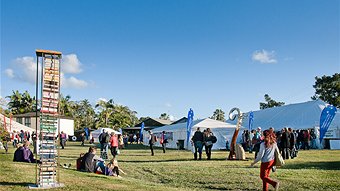 Now in its 17th year, this grand gathering of literati is always a treat. The return of veteran festival director Jeni Caffin brings 130 writers to Byron and some 45,000 guests. The festival program, available on https://www.byronbaywritersfestival.com.au includes a near overwhelming selection of lectures, workshops, panel discussions, foodie opportunities, music, comedy, media and politics. Skills will be tested with slam poetry and literary trivia on the bill. With five marquees and venues around town, patrons will be grateful for the shuttle bus services. The Lakehouse, just a few minutes wander from the on-site Bistro, hosts Launchpad, celebrating 10 book launches over the course of the festival.

Local school groups will have an opportunity to take part and get a sneak peek at the Festival in the days leading up to the official opening. Sunday is Youth Day with special offerings for younger readers.

Hats off to the Northern Rivers Writers’ Centre for their part in bringing this stimulating cultural event to the Far North Coast again this year.