Has the tide turned for the Byron Bay property market?

21 May Has the tide turned for the Byron Bay property market?

In the last few weeks there has been a significant upsurge in property sales in Byron Bay. One agent reported over $26 million in sales in one week at the end of April, including the iconic Watermark property at Wategos. While this is an exceptional result, unlikely to be repeated even in boom times, it does raise the broader question as to whether the tide has turned for the Byron Bay property market.

The answer is a yes and a no!  Undoubtedly there is more sales activity in the last few months. In April , 18 properties were sold in the Greater Byron region, and this is similar to monthly levels pre-GFC. Underpinning this upsurge in activity, discerning buyers have returned to the market, and most agents report a significant increase in inquiry. There is now a growing belief that Byron Bay prices will not fall further, providing, of course, there is no serious global downturn. Providing a property is well priced and at a considerable saving to previous valuations, this is seen as a good time to buy. So the tide has turned, but in a faltering and very discerning way. There is a lot more activity, but only at prices aligned with current market values.

The next part of the question is when will prices begin to recover? While there are definite local factors affecting the Byron Bay market, it is worth having a look at national trends for house prices. The graph below from the Australian Bureau of Statistic shows house price movements nationally to March, 2012. 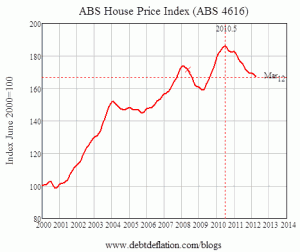 Since the peak in June 2010, Australian house prices have fallen 6.1%. Many commentators have suggested that Sydney house prices rose in the March quarter, but there has been contradictory evidence as to whether this happened. Certainly the recent cut in interest rates supports the possibility of slow price recovery starting in the June quarter.

The only data available for Byron Bay comes from PR Data that reports Byron house prices dropped 17.6% in the 12 months to March, 2012. Much of the decline occurred in the August-October period of 2011 with prices stabilizing in February and March of this year. The current pick-up in activity may result in a small increase in April. There are some positive factors going forward supporting a slow increase in house prices, but any significant bounce back to the prices of a year ago, seems most unlikely.

I would really enjoy hearing your views on whether the tide has turned.