The Mullumbimby Music Festival 2013 is returning to the biggest little town on the NSW Far North Coast from Thursday the 21st to Sunday the 24th of November.

The fantastic thing about the Mullum Music Festival is there are venues all over town from the Mullumbimby Civic Hall to the Ex Services Club and the Courthouse, down the road to the 100 year old Drill Hall, the Mullum Bowlo and the High School.

If you’re too weary to stroll between events The Big Red Bus and the Magic Bus are available to help transport you. 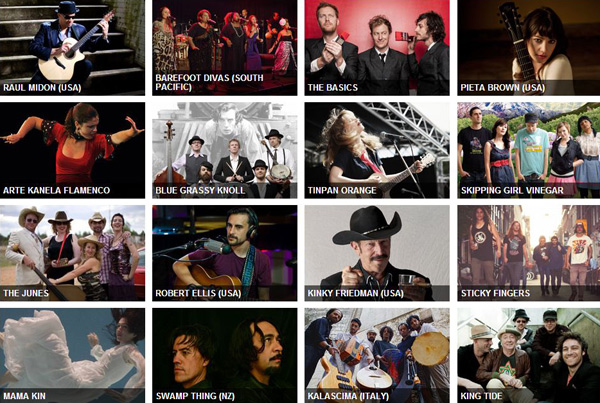 In addition to the wealth of famous international musicians the festival policy calls for one third of the acts to draw on our considerable local talent. With free concerts, street theatre and circus feats  interspersed among the ticketed events there’s something for everyone to enjoy.

Start the day with a free yoga class at the Civic Hall and keep an eye out for the secret gigs, roving performers and special events at various locations around town such as the Mullum Farmers Market, Byron Community College (song writing and puppet making workshops), a garage band workshop at Mullum Mac and special performances at Poinciana Cafe, Santos, Lulu’s Cafe, Middle Pub Balcony, St Martin’s Hall and St John’s Hall.

On Sunday a musical street parade will depart from the Council Chambers at 11 am and end at the Civic Hall at noon. Come early (10:15 am), bring your instruments along and join in in fun.

The weekend will have plenty of artistic touches like lighting provided by Lighten Up!, the creative Lismore Lantern Parade team.